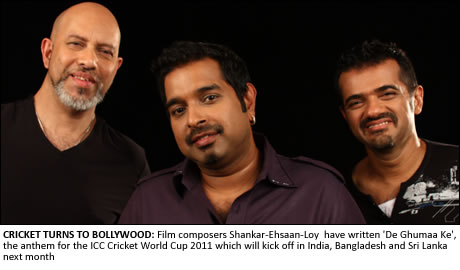 CRICKET chiefs are hoping to add some Bollywood spice to the forthcoming 2011 World Cup after roping in three of Bollywood’s most successful composers to write the tournament anthem.
Award-winning trio Shankar-Ehsaan-Loy – famed for their Bollywood hit factory – were invited to be part of the ICC Cricket World Cup 2011 which will kick off next month in India, Bangladesh and Sri Lanka.
And with still more than a month to go, the catchy World Cup anthem, De Ghumaa Ke, is already making a big impact in the sub-continent and beyond.
As popular and critically acclaimed music directors of Bollywood, the trio have created an upbeat song, with versions in Hindi, Bangla and Sinhalese that will feature widely in the build-up to and during the tournament that will run from 19 February-2 April 2011 in Bangladesh, India and Sri Lanka.
“We thought about what one should expect of an anthem, and we wanted to compose a song that appealed to every cross-section of society, the trio said.

“The title De Ghumaa Ke (literally meaning ‘Hit it Hard’) is a term you use whether you’re watching your own local team or Sachin Tendulkar hit a six. That’s the whole idea, a fun song that will catch on and we hope it gets the crowds chanting and dancing in the stands throughout the ICC Cricket World Cup.”
Cricket fans from across the globe will descend on the sub-continent in the coming weeks hoping to see their team lift cricket’s biggest prize.
So will they get into the Bollywood swing with ‘De Ghumaa Ke’?
“Oh definitely, 100%,” say the trio. “It goes without saying. They’ll be singing it in their own way.”
One thing’s for sure – the 2011 cricket World Cup is definitely going to be swinging to the Bollywood beat. 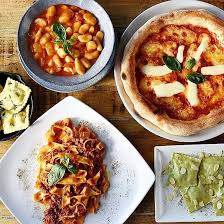 A Hearty Italian on Five Ways

When you should Use Your House Equity (once Not To!). Using the assets in your home are a smart selection for some individuals.

Dr. Amar Bose To Be Honoured At The Asian Awards