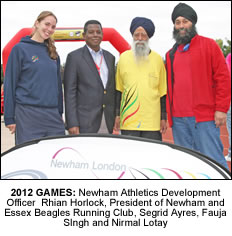 THE OLDEST marathon runner in the world will be flying the flag for Newham’s involvement in the 2012 Games when he competes in his next challenge.
Fauja Singh, aged 98, will be running the Toronto Waterfront Marathon this weekend alongside fellow teammates from the Sikhs in the City running group, who have a combined age of 256 years.
He will be wearing a Newham 2012 t-shirt during the 26-mile race.
The long-distance runner is the current world-record holder as the fastest nonagenarian to complete a marathon and will don a Newham t-shirt when he participates in this weekend’s event.
Sikhs in the City’s members are renowned as much for their determination as for their longevity, and will be looking to coaches Harmander Singh and Nirmal Lotay for physical support and receive spiritual guidance in return.
Fauja has previously been an ambassador for the 2012 Games and claimed five new world records in 2005 as part of an event to demonstrate London’s suitability as an Olympic City.
He was also a torchbearer during the Athens Olympics Games a year earlier.
Fauja’s 38-year-old teammate Nirmal is Newham born and bred. The BT worker lives in Forest Gate with his wife and two children.
He said: “We are happy to fly the flag for Newham’s involvement in the Olympics as we believe the borough’s success ought to celebrated.
“Sikhs in the City is an ideal choice to represent the borough an example of the borough’s diversity.”
Newham is the largest Olympic borough, hosting around 60 per cent of the 2012 Games.
Executive member for the Olympics and public affairs, Cllr Paul Brickell, said: “Fauja’s participation as part of the Sikhs in the City team is a fine example of older people staying active – a great deal more active in his case than some of us have ever been!
“We are delighted he has agreed to represent the borough in this way.  We wish Fauja and all the runners’ good luck for the race and a safe journey home, when they are sure to be given a heroes’ welcome.”

Big clean up in the City from the local community

Funds debts visalia. Learn how to get loannear that is payday: Visalia (CA)