Distrust rises in line with the diversity of their local area. 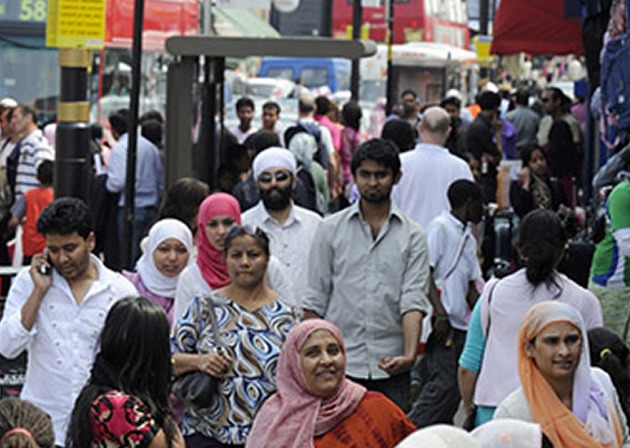 A study reveals that the level of distrust felt by white British people towards ethnic minorities rises in line with the diversity of their local area. Yet the more day-to-day contact they have with each other, the less threatened they feel and this effectively ‘cancels out’ the distrust. The level of ethnic diversity had no significant effect on the trust levels reported by those surveyed from ethnic minorities. The findings are published in the journal, Psychological Science.
Lead author of the study Dr Katharina Schmid of Oxford University’s Department of Experimental Psychology, said: ‘Our research shows that having a diverse population does not result in high levels of distrust when the people in that area are also in regular contact with each other in a positive way. People feel less threatened and so the best way to reinforce trust is to encourage different groups to mix. This social interaction could be at the level of meeting up socially or simply a trip to the corner shop.’
To find out how ethnic diversity affects levels of trust amongst communities across England, face to face surveys were conducted with 868 white British and 798 ethnic minority adults from 224 neighbourhoods. The neighbourhoods were wide-ranging, both in wealth and ethnic diversity. Participants were asked to numerically rate how much they trusted people from their own and other ethnic groups in their area. The survey also asked them whether they felt threatened by other groups and asked them what level of contact they had with other ethnic groups.
‘We wanted to test the controversial idea that diversity drives down neighbourhood trust, often suggested by previous studies,’ said Dr Schmid. ‘Up until now, many studies have focused mainly on attitudes towards different ethnic groups, but this is only one part of the story. Importantly, we have found that positive contact between majority and minority ethnic groups plays a big part too. When you add this to the equation, you see that the negative impact of diversity on trust vanishes.’
The economic and political impacts of immigration on jobs, benefits and services are widely-studied but discussions around the social effects of diversity on trust are under researched and often based on anecdotal evidence. This latest research, the most comprehensive study of diversity and trust in England to date, could inform policy relating to immigration and social cohesion.
‘This is a debate in which psychology can offer important insights,’ said Professor Miles Hewstone of Oxford University’s Department of Experimental Psychology, senior author of the study. ‘ ‘We find that diversity offers opportunities for positive contact between people of different groups, with positive consequences for trust. Having frequent positive interactions with other groups reduces how threatened people feel, cancelling out any negative effects.’
To test the effects of neighbourhood diversity on trust and threat, white British people were asked questions about whether they felt ethnic minorities threaten their way of life, increase crime levels  which affected them directly, or take their jobs. Ethnic minority participants were asked the same questions about white British people.
Similarly, each group was asked how often they interact with people from other groups in everyday situations, for example in corner shops. More broadly, respondents were also asked how much they trust people from their own and other ethnic groups as well as everyone in their neighbourhood.
The study controlled for key factors including age, gender, education, income and neighbourhood wealth as these can affect trust independently of diversity.