Home Interviews Shaana Diya: From Bollywood to ‘West is West’ 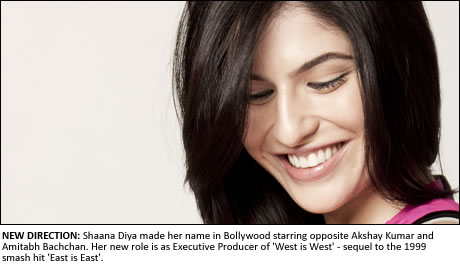 To say Shaana Diya is a woman of many talents is an understatement.
The half Indian – half Swiss actress may have started out alongside Akshay Kumar and Katrina Kaif in Namastey London and later opposite Amitabh Bachchan in Bhootnath, but today she gears up for the release of the hotly anticipated ‘West is West’ – sequel to the 1999 Brit-comedy East is East.
You’ll be hard pressed though to find Shaana on the big screen this time round as her involvement in West is West lies specifically behind the camera…as Executive Producer. We caught up with Shaana to find out what prompted such a career change, and if ‘West is West’ will live up to the huge success of its predecessor…
Shaana lets talk West is West – the million dollar question…is it as good as the original?
Yes it is definitely as good! West is West is very much a stand-alone film, with an abundance of heart and soul! Ayub Din Khan who also wrote East is East is brilliant and brought back the characters we know and love again in West is West.
It must feel great to be involved in a project like West is West not only considering the huge success of East is East but the great cast as well…
Yes, I feel extremely privileged to have had this opportunity
You’ve gone from actress (Namastey London, Bhootnath) to executive producer (West is West) – that’s quite a career change! What prompted this?
Being half Jewish and half Gujarati, I guess it was just a matter of time! On a serious note, I grew up amongst a family of entrepreneurs and supplementing my love for acting and films with learning about the business side seemed like a natural progression.
You spent a lot of your career in front of the camera so it must have felt strange being behind it for West is West…
Luckily during school, I had interned with a famous LA production Company and was a runner on Mira Nair’s ‘Vanity Fair’, so knew what it would be like being on set, whilst watching from behind the camera. It fulfilled me in a way that is incomparable to acting! 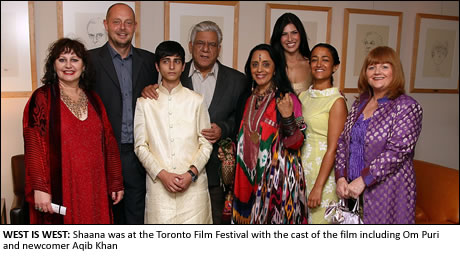 What did your role entail as executive producer?
West is West was my first experience as an Executive Producer, so I wanted to learn as much as possible and be part of the entire process – not simply just finding investment for the film which I did in any case. I was fortunate enough to have Leslee Udwin, the Producer, mentor me along the way, teach me everything from how the casting process happens, to pre-production, principal photography and even post-production. It was a fascinating and educational experience and I have learnt much from it.
You mention Leslee Udwin there – what was it like being mentored by her?
I was extremely lucky to have had the opportunity to be mentored by Leslee, because for her, making ‘West is West’ was not just a job. It became her Life!  To find a teacher with so much passion for detail, only helped me learn quickly and fall in love with the entire process of making films!
What challenges did you face as Executive Producer?
You always face challenges when making a film, and the most valuable lesson I learnt during ‘West is West’ is how to work with a team and ensuring that your team around you is amazing! Leslee meticulously picked her team, that helped support and solve any problems or difficulty that may have arisen. If everyone works towards the same common goal, of making a beautiful film, no challenge seems too hard to face.
Is producing something that you want to concentrate more on now? Is acting on the backburner?
I will definitely continue being involved in the world of production as well as acting. Acting will always be my first love, but I plan on supplementing it and enhancing it with producing in the future. I have always had big dreams and my introduction as an EP, has only made me want to dream bigger!
How did the West is West on-set experience differ to the Bollywood films you’ve been part of?
The level of organisation and preparation on West is West was definitely superior, as well as the attention to historical accuracy and details. I enjoyed forming personal relationships and getting to know everyone behind and in front of the camera on West is West. While in the Bollywood Films I have been involved in, there is often a distinct separation between the actors and the crew.
You have a new production company – 108heads. What type of films will we see emerge from 108heads?
My LA business partner, Sue Ling Braun, is half Chinese and half Jewish – an intensely creative, genetically interesting mix like me!  The woven stories of our lives, the blend of our exotic heritage and most of all, the essence of being strong, global, intelligent, sensitive women…the blend of all this will help us pick and tell the stories we want to tell. The juxtaposition of East and West, Male and Female, Dreamers and Realists, create the conflict and struggles of our daily lives, and this in essence embodies the kind of films we want to make. We have a couple of fascinating stories and projects on hand….So watch the Space!
Finally, Shaana we’re all anticipating the release of West is West in February…tell our readers why they should definitely watch it when it hits the big screen…
The Film for me is a big Must see! Everyone and Anyone who is part of a Family, can relate to the joys and struggles in the Film. The world is a global village and West is West through laughter and tears, reflect a perfect example of how two cultures can co-exist.  Get ready to laugh loudly and be deeply moved!
West is West is released nationwide on 25th February 2011
For more information on Shaana log onto www.shaanadiya.com