Home Uncategorised Fancy some Popcorn for the film? 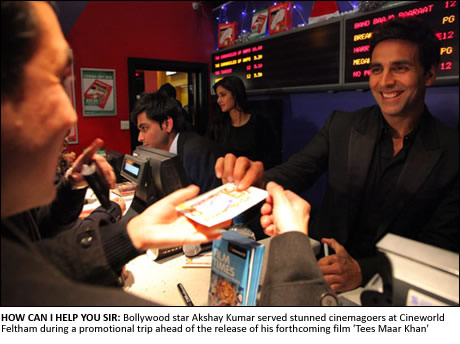 THEY may be two of Bollywood’s biggest film stars, but that didn’t stop Akshay Kumar and Katrina Kaif getting behind the popcorn counter and serving the public at a London cinema.
The duo, along with film director Farah Khan, visited Cineworld in Feltham last night to launch advance ticket bookings for their forthcoming blockbuster release, ‘Tees Maar Khan’.
Hundreds of fans flocked to the cinema to catch a glimpse of the Bollywood stars – and they were in for a shock with Kumar and Kaif decided to turn cinema staff for the night.
Jumping behind the counter they made sure cinemagoers were well stocked up with popcorn and drinks for the evening!
See More pictures of Akshay and Katrina at Cineworld Feltham here!
‘Tees Maar Khan’ opens in cinemas across UK on Wednesday 22nd December 2010