Home Uncategorised ‘I’ll be back’ 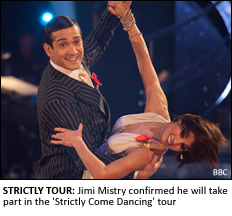 JIMI Mistry isn’t quite hanging up his dancing shows just yet after confirming he’ll take part in the Strictly Come Dancing official tour at the end of the year.
The actor became the fifth celebrity to leave the popular BBC show on the weekend despite posting his best score of the series with dance partner Flavia Cacace.
But speaking to Tommy Sandhu on the BBC Asian Network he revealed his dancing days weren’t quite over.
“You’ll be the first person to hear this, it’s a little Tommy exclusive. I’m actually going on the tour, I’m actually gonna be doing the Strictly tour, which starts I think just after Christmas, so we’re going all over the country for a month or so and taking the show on the road. I’m really looking forward to it – it will keep me active, keep me fit, keep me focused for another period of time.”
Speaking of his shock exit, Mistry spoke of his disappointment, but tried to put a positive spin on it.
“I’m just coming to terms with the fact that that’s the case and trying to look forward,” he said.
“For the last couple of days, me and Flavia have been just sitting there thinking how did it happen. Everything for us seem to be going according to the Strictly plan’. All of a sudden, you find yourself at the bottom and you’re like, how did that happen?”
He admitted he felt “robbed” by the decision, adding “I don’t feel like it’s justified. It’s a situation like this when you pick yourself up and move on. We did go out on a high, that’s a great thing.  It’s better to do that, than outstay your welcome or make a fool of yourself. The sadness is that I think we we’re gonna do a lot better as well.”
Mistry also revealed he was planning a Bollywood number for the show – maybe its something only fans will get to see when the Strictly tour kicks off later this year!