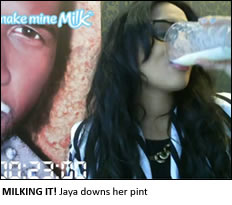 ASIAN music star Jaya has trounced teen heartthrob Justin Bieber…in the battle of the ‘Make Mine Milk’ challenge!
The ‘DJ Do It Again’ singer was required to gulp down a pint of semi-skimmed milk as quickly as possible as part of the campaign which is designed to raise awareness semi-skimmed milk.
Jaya polished off her pint in 23.06 seconds – faster than Justin Bieber!
The American star managed his pint in 26.03 seconds
After completing the challenge Jaya seemed pleased with her time triumphantly declaring: “Woohoo 23.06 seconds – take that Justin Bieber!”
Despite Jaya’s best efforts, it wasn’t quite enough for a podium finish. Jaya is currently in fourth place on the ‘Make Mine Milk’ Challenge leader board which is headed by former X-Factor star Olly Murs with an incredible time of 4.1 seconds!
Jaya, who has supported N-Dubz on tour, was keen to follow in the footsteps of a number of celebrities who have backed the campaign. These include Gabriella Cilmi and Sophie Ellis-Bextor.
More celebrities are set to take up the challenge in the coming weeks as the ‘make mine Milk’ Challenge continues to test the milk drinking abilities of the world’s hottest talent in order to find the ‘Champion Milk Chugger’.
Watch Jaya in action HERE!