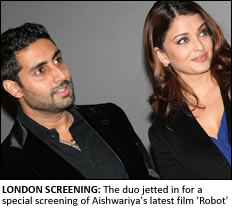 AISHWARIYA Rai Bachchan and husband Abhishek jetted into London for a special screening of her latest film ‘Robot’.
The duo took part in an exclusive screening hosted by B4U Pictures at Cineworld Troccadero, Piccadilly Circus.
Bollywood’s most talked about couple wowed the crowds as they entered the screening to say a few words. Aishwariya Rai Bachchan spoke about her experience with working on the film and alongside the south Indian film legend Rajnikanth.
The screening had over 400 guests, who had all come to witness the first viewing of one of the most eagerly awaited big-budget films to be released from Bollywood this year.
Sunil Shah, Head of Film Distribution at B4U said: “The screening was a great success, the B4U team worked extremely hard on the promotion of the film, and we are proud of the outcome. I am thankful to Aishwariya Rai Bachchan and Abhishek Bachchan, for visiting the screening and interacting with the guests, it was brilliant to be able to witness the magic of ‘Robot’ in the presence of the star of the film.”
The film, one of Bollywood’s most expensive to date, is released nationwide on October 1st.