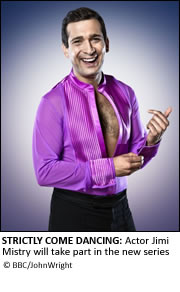 BRIT actor Jimi Mistry is used to acting in front of the camera – but now he’ll have to try dancing on live TV!
The 37-year-old will join a host of celebrities including Rugby player Gavin Henson and Eastenders favourite Scott Masden, for BBC’s hugely popular show Strictly Come Dancing.
The show kicks off what will be an exciting series this month and Hollywood A-Lister Jimi is raring to go.
“I think I’m most looking forward to the Latin-inspired dances – the Samba, Salsa and maybe the Cha-cha-cha – dances that you can express yourself to… well, try to anyway,” the actor said.
He will be paired up with a professional dancer in a bid to land the coveted winners crown.
But he won’t know which dancer he will be paired with until the Strictly launch show on 11 September.
So what is Jimi looking for in his potential partner?
“A good teacher, a friend and someone who can inspire me to do something that I never thought I’d be doing in a million years,” he said.
Jimi, star of Hollywood films Blood Diamond and disaster movie 2012, as well as hit Brit flick East is East, already has some dancing experience – busting a few moves in the romantic comedy The Guru!
But the pressure will really be on when he has to perform on the live shows in front of an audience and the judges.
So what is the talented actor most nervous about?
“Dancing live on TV in a sparkly, sequined shirt… what else?”
Catch the Strictly launch show on BBC on Saturday 11 September, with the first live shows airing on Friday 1 October and Saturday 2 October.