Duo make trip as charity single is lined up 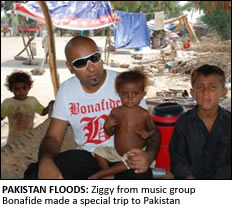 MUSIC duo Bonafide have extended their support to the victims of the Pakistan floods by making a special trip to the affected region.
Ziggy, one half of the group, visited the severely damaged region of Pakistan with over £20,000, raised following a charity car wash by the duo in Rochdale last month.
Ziggy, Insar and good friend, Jay Ali were amongst the Bonafide camp who took the money to Pakistan and spent three days in Muzaffar, which is one of the worst hit area’s as a result of the floods. Bonafide and team set up a camp there in which they provided food for the people of Pakistan in order for them to eat proper meals.
Speaking about his visit, Ziggy said: “After visiting Pakistan, I couldn’t believe how damaged the region was. Actually being there and seeing it with my own eyes, all the suffering, no shelter, no food, children who have lost their parents, it made me want to do as much as I can to help everyone there.
“They really do need our help and with everyone’s kind donations we can slowly re-build the communities affected by the flood.”
As well as taking part in the charity car wash, Bonafide have been in the studio with Hunterz working on a charity single titled ‘Jeevay Pakistan’.
The track is written and composed by both Maz and Ziggy and produced by established producer Kam Frantic. This will be the first time the boys will be singing in Urdu, connecting to their homeland and reminding people not to forget their roots.
Keeps your eyes and ears pealed for this heart-warming track with a video featuring some top celeb names!