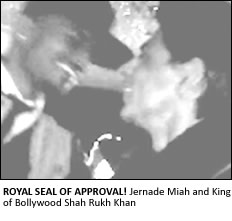 JERNADE Miah, the prince of Asian R&B has a royal fan – King Khan!
Shah Rukh Khan, known as the King of Bollywood, bumped into Jernade at a private party last week where the iconic Bollywood star was attending the wrap of his latest film project “Ra.One”.
And when Shah Rukh asked Jernade for an impromptu performance for guests, the 24-year-old East London prodigy obliged.
Following the performance Shah Rukh was overheard telling the 19 year old, “You’re gonna be the next big star. I love the song you just performed.”

The song in question was a track entitled “Empty Box” which will be included on the singer’s forthcoming Mixtape named ‘Double Check’ due out in early Autumn.
Watch the video footage HERE!