1001 Inventions and The Library of Secrets scoops nine awards 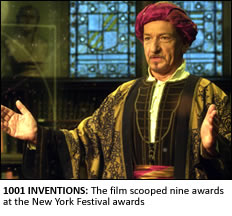 A SHORT film about the scientific heritage of Muslim civilisation has won the prestigious ‘Best Film; award at the New York Festival.
1001 Inventions and The Library of Secrets, starring Oscar-winning screen legend Sir Ben Kingsley, dominated proceedings at the 53rd annual New York Festivals International Television & Film Awards.
As well as taking the most prestigious award of the evening – Grand Winner for Best Film – the thirteen minute Muslim Heritage movie also scooped an additional five gold medals and two silver medals.
The short film was launched in January 2010 as part of the 1001 Inventions exhibition at London’s Science Museum.
Since then more than two million people have viewed the film which is available to watch free online.
Prof. Salim Al-Hassani, Executive Producer of the film said: “It’s truly humbling to see that our efforts have been recognized in such spectacular fashion by a long-established and internationally respected festival. I hope that these awards help raise awareness of the work we’re doing within the 1001 Inventions initiative. Our aim is to increase cross-cultural understanding and help people discover a history and culture that we all share, but is still under-appreciated.”
The film 1001 Inventions and The Library of Secrets can be seen as part of the 1001 Inventions exhibition at London’s Science Museum, and can also be viewed for free at the official website www.1001inventions.com/Libraryofsecrets.