Hrithik and Barbara sizzle in ‘Kites’ 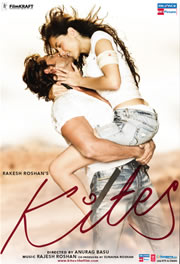 Kites
Director: Anurag Basu
Cast: Hrithik Roshan, Barbara Mori, Kangana Renaut, Kabir Bedi
In the harsh terrain of the Mexican desert, a mortally wounded man is left for dead in the heat of the desert sun. This is J, once a street smart, carefree, young guy and now a wanted man.
The only thing keeping him alive is the quest to find the love of his life, Natasha. A woman, engaged to another man, but surely destined for J.
Intended to change the very shape of Indian cinema upon release, Kites is a thrilling love story starring hot Bollywood property, Hrithik Roshan and Mexican actress Barbara Mori.
Already equipped with a musical family background, the film also sees Hrithik debuting as singer. His song ‘Kites In The Sky’ is already riding high in the Indian popularity music charts
Whilst shooting a car stunt sequence in Los Angeles, Hrithik hurt his knees and later injured his arm which he has already recovered from.
Kites has been directed by Anurag Basu but Brett Ratner, of Rush Hour, and X-Men fame has reworked on the English version and re-edited by Mark Helfrich (Rush Hour and X-Men fame) for a global audience appeal.
Coming from the makers of sci-fi movie, Koi Mil Gaya and superhero film, Krrish, Kites is definitely destined to fly very high at the UK box office upon release. One to watch out for!