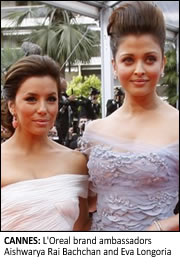 BOLLYWOOD actress Aishwarya Rai Bachchan has made her regular appearance at the Cannes Film Festival.
The actress, who is a brand ambassador for cosmetics giant L’Oreal, walked the red carpet for the screening of the Russell Crowe blockbuster Robin Hood.
The giant cosmetics company is a festival co-sponsor and its various faces from around the world are flown in to walk the red carpet.

Ash was joined on the red carpet by Desperate Housewives actress Eva Longoria.
Actor husband Abhishek Bachchan is expected to join his wife at Cannes later in the month to publicise their Bollywood film Raavan.