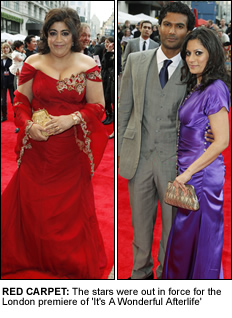 THE STARS of supernatural comedy ‘It’s A Wonderful Afterlife’ took to the red carpet last night for the London premiere of the film.
Director Gurinder Chadha looked stunning in a floor-length red dress at the Leicester Square premiere last night.
She was joined by stars of the film Sendhil Ramamurthy, better known for his role in the hit US drama Heroes, newcomer Goldy Notay, British actor Jimi Mistry and BAFTA-nominated Sanjeev Bhaskar.
The actors basked in a party atmosphere with dhol players and Asian dancers featured in the film leading an entertaining procession along the red carpet.
Speaking at the red carpet, director Chadha said: “People always ask me to do another Bend it Like Beckham, I would say It’s a Wonderful Afterlife is like its naughtier cousin!”
Leading actress Goldy Notay, who wowed the crowd with her stunning figure added; “This was a great film to be a part of, even though I had to put on a lot of weight to play my character! We had a fantastic time making the film and that really shows on screen.
“This is a film about love, comedy, and ultimately it’s a fun film. Women can really relate to Roopi and her journey to find Mr Right.”
Cast and crew of the film will be in Birmingham on Wednesday evening for the regional premiere of the film.