Home Interviews Learning from the master 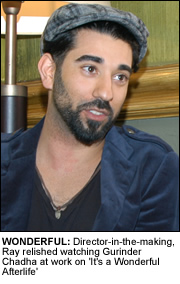 TALK about up-and-coming British Asians producers and one Ray Panthaki may not be a name that springs to mind.
Since his stint as a ‘Ferreira’ in Eastenders, Ray has been busy both in front of and behind the camera. He co-produced and starred in the brilliant urban British film Kidulthood and this month he’ll hit our screens in the brilliant supernatural comedy ‘It’s a Wonderful Afterlife’.
We caught up with Ray to find out about his character in the film, about his passions behind the camera and what he learnt from director-of-the-moment, Gurinder Chadha.
How did you get involved in the film?
I got a call from my agent saying Gurinder would love for me to take a look at the script for ‘It’s A Wonderful Afterlife’. To get a call like that is just an amazing thing. I’ve always wanted to work with Gurinder and I could have pretty much said yes without even reading the script. When the script came to me I already knew what my decision was going to be regardless of what my role was going to be. I read it, really enjoyed the character and loved the script.
Tell us a bit about your character
I play Jazz who’s a trouble making younger brother. He’s mischievous around the house always causing problems, winding up his sister and mother. He was a fun light hearted character to play and Gurinder gave us the freedom to play around with the character. He was just a really enjoyable character to play.
There are so many well-known British Asian actors in ‘It’s a Wonderful Afterlife’. You must have had such a great time on set
I had the best time. It was such good fun. I remember going through the read-through on the very first day and just sitting around this table with all these amazing British actors. It was really nerve-wracking! I didn’t feel worthy of being there. You’ve got people like Sanjeev (Bhaskhar), Mark Addy, Zoe Wanamaker, these amazing British actors who are at the top of their game. You learn so much from these guys.
This was your first time working with Gurinder wasn’t it?
Yes it was and it was a brilliant experience. All actors have a wish list of the directors that want to work with and for me Gurinder was always on the list. She’s brilliant to work with, just a ball of relentless energy and always laughing and smiling. There’s a real family unit on set and everyone has so much fun on set yet the work still gets done to a massively high standard. It’s one of the best experiences ever for me and I love to work with directors like Gurinder.
You’ve done work behind the camera haven’t you?
Yes, I have…
What was it like watching Gurinder work?
You can learn so much from Gurinder. I’ve never actually directed before, but produced in the past. It’s a masterclass, working with someone like Gurinder is a masterclass. You learn so much. And I certainly did. She’s so calm and collected yet the work gets done and she has fun. It’s a high pressured tense atmosphere you’re in. You’re playing with someone else’s money; large amounts of money and you’ve got to get the film done. Yet she does it all so effortlessly.
Is directing something that interests you?
Definitely. It’s actually my next project. I’ll be directing a film from a script that I’ve written. Something that’s really kind of personal to me and I’m very passionate about making so I’ll be moving into the whole directing area now.
Is the acting on hold then?
No never. Acting is my number one love. People ask me that all the time ‘do you want to be an actor or a producer, is the producing come first now’. But it’s not that at all. Acting is what gets me up in the morning; I live and breathe it, it’s my passion. But producing is something I’ve realised that I’m good at and it works hand in hand with acting. If I produce I’m able to create acting roles that I want. But if someone put a gun to my head and asked me if it was acting or producing, it’s acting hands down.
You’re in Birmingham for the regional premiere of the film. How important was it to get the film out of London and have something for the fans here?
It’s very important and I hope we get a lot of support in Star City tonight. There’s a huge Asian community in Birmingham and with this sort of movie it would be right to bring it here. In an ideal world we’d be having premieres’ across the UK, but Birmingham feels right and I’m really looking forward to it.
‘It’s a Wonderful Afterlife’ is released in cinemas across the UK on the 21st April 2010.
Interview by Zakia Yousaf