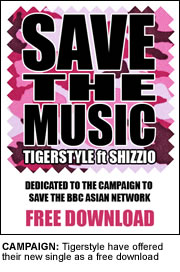 SCOTTISH music maestro’s Tigerstyle have released a single in a bid to stop the closure of the BBC Asian Network.
The station is facing the chop after BBC boss Mark Thompson announced plans to close the station as part of a major service review.
Thousands have taken to Facebook supporting the radio station while high profile British Asian stars have also voiced their disapproval at the plans.
Now Scottish brothers, Raj and Pops – the music brains behind Tigerstyle, are urging British Asian music fans to show their support ahead of a May deadline for public opinion on the proposed changes.
Teaming up with London MC Shizzio, Tigerstyle have released ‘Save The Music’, a track dedicated to the campaign to save the Asian Network.
The brothers’ are offering the single as a free download and want supporters of the station to e-mail the BBC Trust to voice their concerns over the proposed closure.
But why are Tigerstyle so adamant the show must go on for the Asian Network?
According to Pops, Tigerstyle would have not enjoyed any of its success had it not been for the Asian Network.
In recent years the brothers’ have been one of the few British-Asian acts to have recorded a live session with the legendary late Sir John Peel. They have also appeared at Glastonbury – a rare feat for an Asian act, as well as the BBC electric Proms.
“Asian Network has given is near to 10 years of support,” says Pops.
“We feel it is imperative that the Asian music industry and the wider Asian community stand together and make their voices heard in order to keep this radio station alive. Without the Asian Network there will be no outlet for British-born Asian musical talent, the industry as a whole will suffer greatly, and future generations of British born Asians will be without a relative and vital link to their culture.
“The Asian Network is the only service to cater properly for the British born Asian community.”
Click here for a FREE download of Tigerstyle Featuring MC Shizzio ‘Save The Music’