Maher Ghalaini and Yuri Harris jailed for total of 11 years 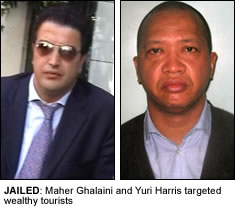 A ‘professional’ thief who helped target wealthy tourists, including a Saudi Arabian prince has been jailed.
Maher Ghalaini used stolen cash and credit cards to fund a lavish lifestyle which included a 30-minute shopping spree in Selfridges totaling over £8,500.
He was aided in his plan by Yuri Harris, described by police as a “career criminal.”
The duo were finally caught by officers from British transport Police at an international jewellery fair in Earls Court last September where they posed as directors of a phoney jewellery company.
Ghalaini, 50, of Ealing, London, was jailed for four year’s at Southwark Crown Court last week, while Harris, 48, of Hove, East Sussex was sentenced to seven years.
The court was told the men targeted two wealthy tourists who were in chauffeur-driven cars in central London in August 2009.
The first, on 17 August, saw the pair approach a vehicle belonging to a Saudi Arabian prince, parked near New Bond Street.
After distracting the chauffeur they stole a pouch containing £5000 cash, bank cards and other items from the front passenger seat.
Three days later the pair stole another bag containing credit cards, cash and other items from the front seat of an Indian businessman’s chauffeured vehicle in Duke Street.
Within days the pair had used one of the credit cards to buy more than £11,000 worth of designer clothes, jewellery, shoes and other items from boutiques and stores in the Oxford Street and Bond Street area, including the 30-minute spree in Selfridges.
Many items bought using the victim’s credit card were recovered during searches of their home addresses.
The court also heard how Harris had previously been arrested and jailed for offences at Heathrow Airport and also in France and Switzerland, where he had conspired with another man to steal a case of valuables at a jewellery trade fair in Basel.
Detective Sergeant John Wolstenholme from British Transport Police said: “These were highly-organised thefts which were carried out with military-like precision by two professional, well-heeled thieves, each with a long and chequered criminal history.”