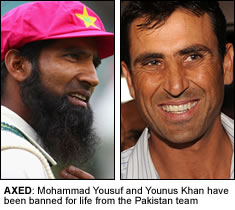 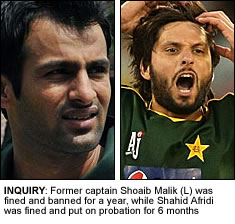 The punishments will come as a crushing blow to the Pakistan cricket team as they plan the defence of their World Twenty20 crown in the Caribbean next month.
The team will also travel to England this summer.
But the PCB were unapologetic about the severity of the punishments handed down saying they would “go a long way to arrest the continuing decline of Pakistan cricket and improve the state of cricket in Pakistan.”
The goings-on in the Pakistan team have never been too far from the glare of the newspapers and media outlets.
Younis Khan quit as Pakistan captain twice last year following reports of match-fixing during their successful World Twenty20 campaign in England. Although the accusations were never proven, there were reports the real reason lay in player unrest headed by Shahid Afridi over his style of leadership.
His replacement – Mohammad Yousuf – found life at the top equally as tough.
He became embroiled in war of words with teammate Shoaib Malik during the tour of Australia with the duo using the media to trade insults. The row led for calls for both players to be axed.
And if that wasn’t enough, Pakistan’s biggest embarrassment during the tour of Australia came via the actions of Shahid Afridi who was caught on camera biting into the ball during an ODI game in Perth.
He was banned for two matches by the ICC.

Get a cash ISA to boost your savings