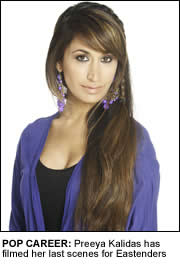 EASTENDERS actress Preeya Kalidas has filmed her final scenes for the BBC soap as she looks to launch a pop career.
The 29-year-old actress, who plays Amira Masood, is said to be recording her debut album which is expected to be released in the summer.
Enders’ bosses announced Preeya was to leave the show back in January having spent the better part of a year in Albert Square.
But they are being tight-lipped over her exit with rumours flying around that she will finally rumble husband Syed’s (Marc Elliott) gay love affair with Christian Clarke (John Partridge).
Over 11 million viewers tuned into the BBC on New Years Day to watch her on-screen wedding. Her final scenes are expected to be aired next month.
An EastEnders insider told website Digital Spy: “The Masoods have loads of dramatic scenes to come over the next few months. Amira’s leaving the Square but bosses are keeping tight-lipped over whether Syed’s leaving, too. Could this be the end of the road for Syed and Christian? Or will Amira leave alone?”