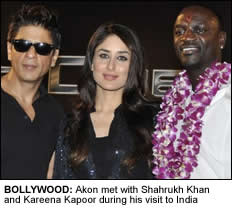 NOT one to be outshone by screen rival Akshay Kumar, Shahrukh Khan has possibly scooped the collaboration of the year signing up R&B singer Akon for his forthcoming Bollywood Sc-Fi film, ‘Ra.One’.
Kumar is well known for kickstarting the ‘east meets west’ collaboration bug having already brought the likes of Snoop Dogg, Kylie Minogue and ‘Rocky’ himself Sylvester Stallone to Bollywood.
But now it’s the turn of King Khan. While unconfirmed reports are claiming Jackie Chan has been approached for the film, one name is a certainty. Award-winning singer Akon has jetted into Mumbai for a three-day visit where he is expected to lend his vocals for Khan’s home production ‘Ra One’.
The film, which will see Khan play the role of a super hero, is being financed by Khan’s production company, Red Chilies Entertainment, with wife Gauri taking the reigns as producer.
Khan introduced Akon to his celebrity chums, including ‘Ra.One’ co-star Kareena Kapoor, at a special party organised ahead of the forthcoming Indian Premier League in which Khan’s team, the Kolkata Knight Riders will participate.
“I am a big fan of Shahrukh,” IANS reported Akon as saying. “I am very familiar with Shahrukh’s work and I am meeting Kareena (Kapoor) for the first time.
The singer also confirmed his collaboration for ‘Ra.One’.
“I will give him (Shahrukh) a couple of versions of the song, the way I do it. And I will also integrate it with the traditional way the Bollywood films are done. I will give them options and they will decide, which one to use in the film,” he said.
Akon has a busy year lined up with a world tour in the pipeline. And the singer said he definitely has India in his plans.
“You will see me doing more things in India soon,” he said. “The world tour is coming soon and India is one of my biggest market so I will do number of shows here.”