Move over Perez Hilton…Brummie Jet’s on the scene! 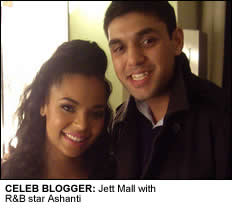 UK journalists have already dubbed Jett a celebrity video blogger to watch, this 22 year old Brit-Asian is fast becoming friends to some of the worlds biggest stars from the Pussycat Dolls through to the Sugababes!
Born Jettinder Mall, Jett comes from the riot torn streets of Handsworth in Birmingham to a single parent household. With a camera given to him as a 21st birthday present he’s come from the middle of nowhere to sharing on screen time with megastars such as lead pussycat doll Nicole Scherzinger and R&B superstar Ashanti.
Armed with nothing but a dream and a camera Jett is already achieving the impossible and wants to inspire others like him. His new blog: http://www.jettstream.tv is his way of proving to everybody just how determined he is to make something of himself and it’s not hard to see why he’s being touted as the UK’s answer to Perez Hilton because everybody seems to love him.
Unlike Perez Hilton though Jett is a nice guy and doesn’t want to profit from exploiting celebrities.
“I’d like for others to get to know me and learn more about my life experience, my stories in the hope that they’re encouraged and see that good things can happen to ordinary everyday people. I really do believe that the Sky’s The Limit and anything is possible,” the youngster admits.
When he isn’t video blogging, this young man serves popcorn in his local cinema every weekend. He knows that nothing is handed to you on a plate and to achieve anything in life you have to work hard.
Jett’s most recent highlights include having lunch with upcoming pop starlet JAYA through to having a chat with global superstar Kelly Clarkson.
Jett Mall ladies and gentlemen – a name we’ll be hearing more from in the future!
Want to see who Jett’s been cosying up to this month? Log onto  http://www.jettstream.tv and http://youtube.com/videoblogwithjett to find out!