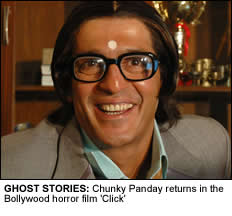 CHUNKY Panday…the long-legged heartthrob of the 80s only has one regret looking back on his Bollywood career – he reckons he’d be a richer star if he joined the industry today.
The veteran actor has over 55 films to his name and these days he’s slowly working his way back into the industry through which he made his name three decades ago.
Speaking exclusively to DesiXpress, Chunky revealed details of his forthcoming horror flick ‘Click’.
So did anything spooky happen on set?
“The fuse kept blowing off during the shooting,” Chunky revealed.
“The shooting which would normally take us one day took us two days to complete. It was a strange occurrence as no one could find out what was the exact reason for the fuse blowing. There was definitely some disturbance in the air, because when we did a pooja on the set after this happening few times, things became completely normal.”
Chunky is also looking forward to the monster Sajid Khan film ‘Houseful’ later this year.
The film has an all-star cast including Akshay Kumar, Deepika Padukone, and of course Chunky.
So with such a long career in Bollywood, is he happy with his achievements?
“Well I can’t say that I am gloating. Everyone is happy with their achievements but I have miles to go before I sleep,” he says.
So any regrets?
“Just one…I should have joined the industry today. I would have been much richer,” he says with a grin.