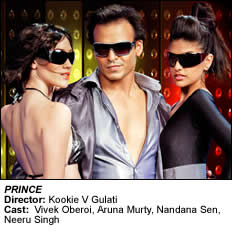 This thriller revolves around the savviest thief in the world who commits the biggest heist of his life.
He wakes up next morning realising he has a gunshot wound on his arm that he doesn’t remember getting.
In his quest to find answers he discovers his name is Prince (Vivek Oberoi).
He used to work for a man named Sarang and his girlfriend’s name is Maya (Nandana Sen.)
He is being hunted by the Indian secret service as the most wanted man in the country.
Only he knows the whereabouts of the heist, containing a deadly secret – a secret that is linked not only to his loss of memory but threatens the future of the Human Race.
Prince can rely only on his razor sharp instincts to salvage himself. The web of deception spins and Prince gets even more entangled as no one can be trusted.
Vivek Oberoi’s work was much appreciated by audiences in Shootout At Lokandwala and Kurbaan. He will now be seen with a new stylish look in Prince, also getting a chance to do all his own stunts.
Shot on the exotic locations of South Africa, Bangkok and Thailand, the movie has been given a slick international look by Hollywood film editor, Nicolas Trembasiewicz.
Consisting of some amazing action sequences under the supervision of Allan Amin, producer Kumar Taurani of RACE fame, already has a winner at the UK box office!