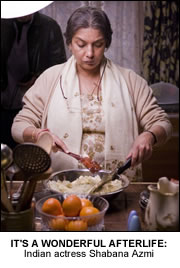 AWARD-winning director Gurinder Chadha will return to UK screens this April with the supernatural comedy, It’s a Wonderful Life, it had been announced.
The film will be released on April 23 across the UK and Ireland.
Chadha has already premiered the film at the prestigious Sundance Film Festival.
The film tells the story of an Indian mum, played by the renowned actress Shabana Azmi, whose match-making efforts turn deadly when she tries to marry off her daughter.
Other cast members include Golden Globe winner Sally Hawkins, Jimi Mistry, Sanjeev Bhaskar and newcomer Goldy Notay.
Click here to see exclusive pictures from the film