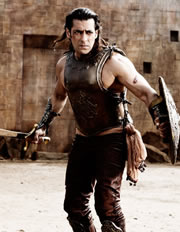 Cast: Salman Khan, Mithun Chakraborty, Jackie Shroff, Sohail Khan, Zarine Khan
As the British enslave India with their devious Divide and Rule policy, kings and Nawabs entrust their precious kingdom to the foreigners.
Except for the brave Pindaris, they prefer death to dishonour and will fight to their last breath to save their land. The bravest, the toughest, the strongest of the Pindaris is Veer.
As Veer takes on the might of the British Empire, he also fights the conniving King of Madavgarh as well as his own jealous tribesmen. But then the stakes are high. Veer has to fight for his love for princess Yashodhara, daughter of his sworn enemy.
Also at stake is his thirst to avenge his father’s dishonour. So as cannons roar, swords clash in fierce battle, the dead pile up.
And when the dust settles on the blood soaked land, Veer the one valiant warrior stands head and shoulders above them all. Veer is an epic saga of bravery and drama, treachery and love.
Veer, is the most ambitious period film to be attempted by Bollywood to date. The storyline has been written by Salman Khan, the lead star of the movie. An in-depth film research lasting for over 8 months took place based on the language, culture, traditions and architecture of that era. Filming and production work which started in 2008 was recently completed.
The movie has been shot extensively in Rajasthan, Jaipur, Jodhpur and various locations in the UK.
The film’s larger than life action sequences involved over thousands of horses, hundreds of elephant, camels and fighters depicting wars on battlefields.
However the film’s running time was under scrutiny recently and since lead star Salman Khan has been heavily involved with the film’s production, he has decided to reduce the length to 2hrs 30mins to hold audiences’ interest throughout the movie.
Veer is one of the most anticipated movies to release in February 2010 by EROS International, based in London.
Manish Gajjar is one of the UK’s leading Bollywood authorities working as a BBC Bollywood Correspondent based at BBC Shropshire and as a Hindi film adviser for VUE cinemas in the UK