Will Syed and Christian get rumbled in monster New Year Special? 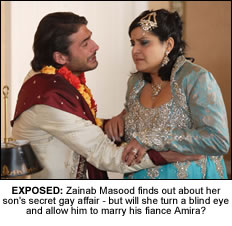 ALBERT Square will have its first taste of a traditional Asian wedding this month – but it could be an unhappy day for newlyweds Syed Masood and Amira Shah.
Fans of the BBC One soap, famous for its explosive Christmas and New Year storylines, will see Muslim character Syed and his fiancé Amira finally tie the knot in a colourful Asian wedding.
But Syed’s guilty secret – his gay love affair with neighbour Christian – threatens to spoil the party.
In episodes which will be shown on New Years Eve and New Years Day the affair is finally exposed when Christian spills the beans to Syed’s mum, Zainab.
Unable to comprehend the news she confronts her son and sparks fly in the explosive episodes.
But will Zainab reveal all to the Masood family? Will Syed finally marry Amira? Or will Christian expose his secret to all in Albert Square?
Watch this New Years to find out!
Photo Gallery: Click here for a picture special of what to expect!