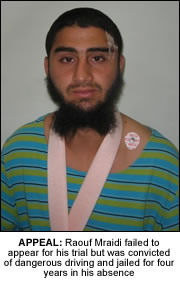 POLICE are appealing for information to trace a bus driver who was convicted of causing death by dangerous driving.
Raouf Mraidi, 30, failed to appear for his trial at Croydon Crown Court. He was found guilty on 2 December and sentenced to four years in prison.
He was convicted of causing the death of Andrzej Tadeusz Karcz, a 28-year-old Polish national following a crash on 7 September 2008.
A tram collided with a double-decker bus driven by Mraidi that was then in collision with a parked BMW in George Street, Croydon.
Mr Karcz, who was a passenger on the bus, was killed, while six other passengers suffered minor injuries and were admitted to hospital.
PC Ian Payne, of the Collision Investigation Unit at Catford Traffic Garage, said: “I would like to express our thoughts and condolences to Mr Karcz’s wife and family.
“Mraidi failed to attend his trial at Croydon Crown Court and enquiries by the South East Collision Investigation Unit based at Catford Traffic Garage continue so that we can bring him before the courts.”
Anyone with information regarding Mraidi’s whereabouts are asked to contact Crimestoppers on 0800 555 111.