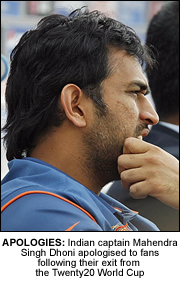 INDIAN cricket captain Mahendra Singh Dhoni is confident his team will bounce back after they were sensationally dumped out of the ICC World Twenty20 by hosts England.
The defending champions had looked clear favourites to retain their crown before the tournament but despite comfortably qualifying for the Super Eights, losses to West Indies and England saw them crash out.
“Cricket never tests your character when you are doing well, it always test you when you are not doing well both as an individual and as a team,” a dejected Dhoni told reporters in the post-match press conference.
“It is a testing time for us. It is not the end of the road for us – we are going to the West Indies shortly and we can repair the damage.”
India will play one further game – against South Africa – before they are expected to fly out of England.
They had entered yesterday’s must-win match at Lord’s under the glare of expectancy as the current holders.
More than 70 per cent of the Lords crowd were rooting for India, while thousands more tuned in back in India.
But despite restricting England to a beatable 154, failure with the bat saw India fall just three runs short of the winning target.
“We are sorry for what happened but we can say we gave our best,” Dhoni added. “I think we have the guys who can handle the pressure, it was a day when nothing really worked for us.”
Dhoni said India would bounce back at the next Twenty20 World Cup in the Caribbean.

“We can definitely prove a point over there. We were never really up to the mark but in nine months time there will be another World Cup and that is the only good thing we can say now,” he said.

“We lost in the 2007 World Cup and we lost in 50 overs, that was the worst part of my career. This loss is disappointing but still I don’t think it comes near to the loss we had in the 50 overs World Cup.”

Dhoni also rejected suggestions the Indian Premier League, which was held in South Africa following security concerns in India, had contributed towards his team’s failure.
“It is a demanding format because you play at different venues, it’s not like you play three or four games at the same point,” Dhoni said.
“But I personally believe it’s not an excuse.”

Anonymous searching hinders online dating signals. They certainly were additionally very likely to have a look at possible same-sex and matches that are interracial.

If you find yourself coping with a primary loan provider, you apply

It could think important to know very well what the ex has been doing...