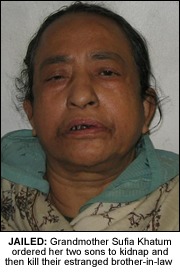 A GRANDMOTHER who ordered her two sons to kidnap and then kill their estranged brother-in-law has been jailed.
Sufia Khatum, 70, and her two sons, Abu Hasnath, 40 and Abu Jahingr, 28, were each sentenced for a total of 21 years at Southwark Crown Court today.
Khatum, Hasnath and Jahingr were found guilty of kidnap, false imprisonment and grievous bodily harm with intent and blackmail at the end of their trial in October.
Following orders from their mother, brothers Hasnath and Jahingr kidnapped and viciously attacked Abul Kalam, 41, in May 2008 over an outstanding £25,000 dowry payment following the breakdown of Mr Kalam’s marriage to their sister Momataz Chowdry.
The court was told Mr Kalam was confronted by Jahingr on May 20 last year after he was spotted walking along Barking Road, East Ham.
Jahingr ordered Mr Kalam into a car, threatening to kill him if he disobeyed his orders.
When Mr Kalam got into the car he was confronted by Hasnath, who was driving, and Khatum, who was sitting in the rear of the car.
The trio warned Mr Kalam not to shout or try and run, saying they would kill him if he did, the court heard.
Hasnath drove the car to their family home in Rosebery Avenue, East Ham where Mr Kalam was bustled inside.
There he endured an eight-hour ordeal in which he was viciously beaten.
The court was told both Hasnath and Jahingr took turns to beat and kick Mr Kalam after their mother told them to “hit him and kill him”.
Mr Kalam pleaded with Khatun to ask her sons to stop but she refused to help him.
The brothers continued to assault their victim for a number of hours, during which they demanded Mr Kalam pay them £25,000.
The trio also made a series of phone calls to Mr Kalam’s family demanding they pay-up in exchange for his release.
His family were eventually able to negotiate his release, after promising to pay the money in full. They subsequently called police.
Mr Kalam was rushed to hospital where he was treated for a broken nose, fractured cheek bone along with bruising and swelling to his face and body. 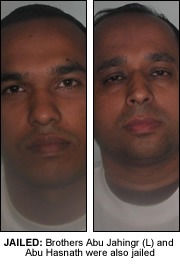 Hasnath and Jahingr were arrested at Rosebery Avenue later on the evening of the 20 May, Khatun was arrested on 24 June.
Sentencing the trio, Judge Anthony Beddoe said: “This was a wicked enterprise, carried out for monetary gain, involving the forced detention of another human being, who with good reason thought he might lose his life that day. None of you has expressed any remorse for what happened that day.”
Speaking after the sentencing, DC Colin Burnett, who led the investigation, said: “This was a violent and organised kidnap where those responsible showed little concern for the welfare of the hostage, exposing him to violence. Their only concern was the payment of a ransom.”