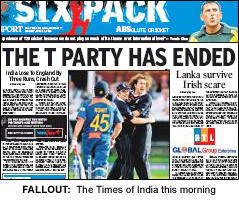 FIRST Australia and now India, the T20 World Cup is beginning to get the reputation as a tournament of shocks.
In a cricket-mad country, the Indian media undoubtedly had something to say about India’s exit at the hands of England yesterday at Lords.
Here’s what some of the major outlets had to say
Matches at home, the below-par attack of New Zealand and fine performances on the worn-out pitches of South Africa during the Indian Premier League (IPL) camouflaged the young Indian batsmen weaknesses against quality pace attack of West Indies and England, who were prepared to dig it short.
Zee News
The tournament is over for India, and now the tough part kicks in. Considering all that has gone before, the media backlash is going to be huge – there are in the press box enough journalists pissed off with Dhoni and his team for their brusque, even contemptuous, handling of recent attempts to whip up controversy.
A losing team is a target of opportunity, so the ‘boys’ can look forward to some interesting reading matter over their morning coffee and sunny-side-up over the next few days.
Rediff
Honestly, from the day India started their campaign, one could feel that all wasn’t right. In hindsight, the loss to the Kiwis in the practice match itself was a pointer. But then, that’s hindsight. The win against Bangladesh wasn’t as easy as the scorecard made it seem, and in the end India were never really tested before the crucial stage. The Dhoni-Sehwag saga just queered the pitch even more. Whatever the reasons — it’s for BCCI now to look back, and ahead — let’s not fall in to the trap of consigning our team to flames. The campaign is over, true, but the dream isn’t.
Times of India
There will be time for post-mortems but first impressions are that they should have seen it coming. The West Indies quicks had them hopping around on Friday night and they got more of the same on Sunday. England’s quick bowlers got the short ball talking and India’s batting bullies found themselves uncomfortably shuffling backwards
Indian Express
Dhoni is to be blamed for the defeat. There was no reason for him to promote Ravindra Jadeja ahead of the match-winning Yuvraj Singh.
NDTV

Celebrity MasterChef 2017 Starts Tonight: Who Are The Contestants?