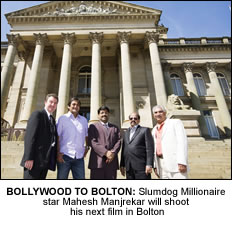 BOLTON is set to provide the backdrop for Slumdog Millionaire star Mahesh Manjrekar’s next production.
Film director Mahesh, who played gangster Javed Khan in the multi-Oscar winning movie, came to the Northern town this week to scout locations for his next blockbuster.
He announced he would be shooting his next film in Bolton at the British Deputy High Commissioner’s residence in Mumbai, during a trade mission in February – an event that was part of a North West trade mission, organised by UK Trade and Investment and led by officials from Bolton Council.
During the mission, Mahesh was persuaded by local restaurateurs Subhash and Geeta Kotecha that Bolton was the best place for his latest film.
Mahesh was joined on the trip by the film’s producer and leading Indian business man Agnelorajesh Athaide, who runs an IT company in Mumbai and is looking to forge links with the University of Bolton, and prominent businessman and councillor from the Indian state of Maharashtra, Sudhakar Chavan.
The trio took in sights including the Grade II listed town hall, which has previously doubled up as a Romanian courthouse in Channel 4’s Shameless, the multi-million pound refurbished Market Place shopping centre and award-winning Bolton Market.
Mahesh has directed and produced many critically acclaimed films including Vaastav and Astitva and plans to shoot his next production in the Marathi language, which is a native dialect of India and spoken by 120 million people.
Mahesh said: “I’ve been to the UK a few times and I’ve heard of Bolton because of the Wanderers but it’s my first visit here. It’s a beautiful place and the architecture of the town hall is outstanding. The people are very friendly and I would like to use some local people in the film, which is about a love story between an elderly couple.”
Film producer Agnelorajesh Athaide added: “The North West delegation who attended Mumbai really motivated us and made us bring this film to Bolton. We were particularly inspired by the vision of individuals like Keith Davies, the council’s director of development and regeneration and officers like Sikandar Badat. It was specifically because of them that we chose to bring the film here.”