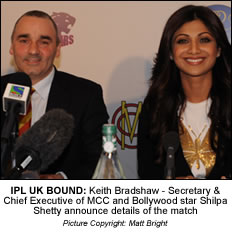 LAST season’s Indian Premier League champions the Rajasthan Royals will play UK champions Middlesex Panthers in the battle of the Twenty20 hitters in a special showpiece match at Lords next month.
The match, which was announced at a star studded press conference in the capital, will take place at Lords in July.
All proceeds raised from the game will go to the British Asian Trust, one of the Prince of Wales’ charities.
The match will see an IPL team play in England for the first time with organisers describing the match as a ‘must-see’.
The Royals, captained by Shane Warne, romped to victory in the inaugural IPL season last year.
Bollywood star Shilpa Shetty part owner of the Royals said she was “looking forward” to retiurning to the UK.
“I am looking forward to seeing the Rajasthan Royals play in London. After the great reception we had in South Africa, I’m sure the British crowds will come out to support the Royals,” she said.
“To play the game at Lord’s will make it extra special, and the UK is a country dear to my heart”.
International stars Shane Warne, Graeme Smith, Yusuf Pathan and Munaf Patel are all expected to play for the Royals in the showpiece game.
Former Australian spinner Warne said the mouthwatering clash between the two sides was a great advert for the game.
“There is no better place for a cricketer to play than Lord’s, and to get to play the reigning English Champions after the cancellation of last year’s Champions League is a great opportunity for the team,” he said.
For information on how to purchase tickets log onto http://ticketsales.lords.org/.

My spouce and I might not feel the same points, nevertheless’s hardly ever really been problematic for all of us

In this regard, the marketing and advertising procedures makes it possible to distinguish between...