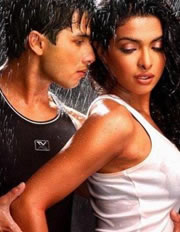 Kaminey
Directed by: Vishal Bhardwaj
Cast: Shahid Kapoor, Priyanka Chopra, Amol Gupte
Twin brothers, Guddu and Charlie are in their early twenties. They were born and bred in Dharavi, the world’s largest slum dwelling in the heart of Mumbai.
The brothers dream of leaving the squalor for better life and prosperity. But the similarity in their outlook ends here.
With dreams in his eyes, Guddu succeeds in getting a job in one of the city based firms. Honest, diligent and careful, Guddu hopes to climb the career ladder and become one of Mumbai’s middle class citizens.
Charlie, on the other hand makes a living by hedging bets at the races. Mingling with the rich and famous, Charlie wants to make quick money. Smart and brave, Charlie dreams of becoming a legitimate bookie one day.
These twins have nothing in common – not even their speech defects. While Guddu stammers when he is nervous, Charlie has a lisp.
The brothers have built their lives in such a way that their paths never cross until one day. . . .
During one of his betting sessions, Charlie finds that one of the races has been fixed in his opponent’s favour.
Angered by such a revelation, Charlie tries to get even with the jockey but just at that moment rival goons burst in.
In the scuffle that follows, Charlie takes off in a getaway car not knowing that it belongs to a ruthless pair of police officers, Lobo and Lele.
So, all hell breaks loose as the officers get on Charlie’s tail. He must now run for his life in order to survive.
Meanwhile, Guddu is performing a street theatre act when his newfound girlfriend, Sweety Bhope appears on the scene, announcing she is pregnant.
Shocked at first, Guddu realises quickly that there is no real problem. They can get married right away!
But there is a problem. Sweety reveals her brother is Sunil Bhope, a gangster with political ambitions.
Sweety informs Guddu that as they speak, her brother’s men are out for his blood.
As the story unfolds, the brothers run to protect themselves, their dreams and their love.
They reach a point where they realise they only have each other. Only by trusting each other they find they can get out of the mess they created.
Critically acclaimed filmmaker Vishal Bhardwaj of the Omkara and Maqbool directs this drama.
Kismat Konnection and Jab We Met star Shahid Kapoor is seen in two contrasting roles. As Guddu, he bears the innocent boy image whilst Charlie sees him as a rough and tough character.
Priyanka Chopra is seen playing a middle class Marathi girl in the movie which is expected to release in UK cinemas this summer.