Victim lay undiscovered in flat for almost a month 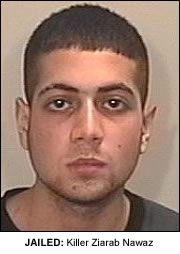 A TEENAGER who brutally murdered his friend has been jailed for life.
Ziarab Nawaz, 18, pleaded guilty at Bradford Crown Court to murdering Mohammed Ali.
The 23-year-old was knifed to death in his Bradford flat following a row with Nawaz.
Mr Ali’s decomposing body was discovered by his landlord almost a month after he was murdered.
Nawaz, from Cheatham Hill in Manchester, was jailed for life and told he must serve a minimum of 15 years before he can be considered for parole.
Detective Superintendent Sukhbir Singh, who led the investigation said: “The murder of Mohammed Ali left his family and friends in shock. His death has left a Mother and Father without a son, and three brothers and two sisters without their sibling. They have been left with a massive void in their lives, as have his friends. Mohammed was a decent lad who had moved to Bradford from the Crumpsall area of Manchester.”