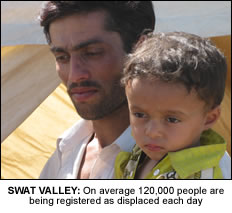 Jonaid Jilani from Oxfam has just returned from the Swat Valley in Pakistan where a humanitarian disaster is playing out. It is estimated nearly 1 million people have fled the war zone following fighting between Pakistan security services and the Taliban. Living in appalling conditions, Jonaid admits the situation is dire.
Writing exclusively for The Asian Today Jonaid gives a painful insight into the unfolding humanitarian crisis.
THE situation is very dire – this is the biggest internal displacement in Pakistan’s history.
On average 120,000 people are being registered as displaced each day. That is the equivalent of a town the size of Watford which is a phenomenal amount of people. It’s a very difficult situation that requires more money and resources to help those affected.
Although many are living in camps, there are also a huge number of people living outside of the camps with host families. Due to a lack of water and hygiene, people are getting diseases such as malaria, diarrhoea and allergies. Many are unable to wash themselves, women are particularly vulnerable as they do not have any place to wash in private. Due to religious sensitivities a lot of the women stay inside the tents and houses and with no cooling facilities are being severely affected by the heat.
There are many people who have fled to areas where they do not have access to healthcare, they do not know where the nearest hospitals are or how to get there. Many who are sick are unable to travel to hospitals.
The heat is becoming more and more intense and hotter which can lead to dehydration and heat stroke. With the monsoon season and torrential rains around the end of June, we are looking at a whole new set of problems for these already vulnerable people. Many people have also fled to flood prone areas.
Most people are not in official camps but in temporary shelters, makeshift camps and with host families whose resources are stretched. They’re less visible but have urgent needs and mustn’t be neglected.
I met many families who had fled Swat, many who were disorientated and traumatised. One man I met in Mardan told me when the shelling began in Swat 5 members of his family were killed, he travelled with his immediate family by foot for 5 hours to Mardan. He looked tired and exhausted and told me his only thoughts were with those he had lost. In Swat he was a baker, here in Mardan he is living in a tent with his family members in hot and dirty conditions.
I also met some families in a village in Mardan, some students, some businessmen who had comfortable lives in Swat. Now they were living in cramp hot conditions, they were drinking from a hand pump that had not been tested, they were washing themselves in a dirty canal. There were a lack of toilets and washing facilities for women and I met some children who needed urgent medical operations. Their parents told me they did not know where the nearest hospitals or healthcare were.
In another village, I met a middle-aged couple who were very ill and needed immediate healthcare, they were living in an open courtyard with a hole in the ground as a toilet. There were scorpions and snakes in the area and no shelter from the rain.
I also spoke to many other families who had become separated from loved ones as they fled the fighting; they were unaware of whether relatives were alive or dead.
Many of the people I spoke to wanted to return to their homes and for things to be back to normal. Their fears now are the lack of water, food, healthcare and the rising temperatures.
The Pakistani authorities have been working with the UN and other humanitarian organisations to set up camps and provide emergency relief and services. The provincial government in NWFP is leading the response. But the Pakistani government’s capacity and resources to deal with such an emergency are limited. Pakistan needs more support from the international community.
Oxfam is responding with essential relief and services, especially water and sanitation. We are providing hygiene kits for people and working closely with local partner organisations.
Oxfam is scaling its response to assist up to 360,000 people. This number includes people inside official camps and outside. We will improve access to clean water and we are planning to install shallow tube wells and to set up water storage and distribution tanks. We are planning to distribute hygiene kits and kitchen sets. We will also construct latrines, either building them ourselves or supporting communities to build them.
Oxfam has launched an appeal for £5.3 million to help the people in Pakistan and the public can help. £20 will buy a hygiene kit for 1 family, protecting people against life-threatening disease. £20 will provide one family with a shelter kit containing bedding, mates, and mosquito nets – everything a family needs to build a place to sleep – so please help.
You can donate by calling 0300 200 1999 or online at www.oxfam.org.uk