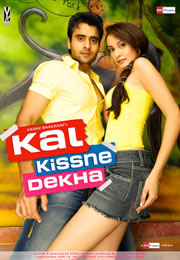 Kal Kissne Dekha
Directed by: Vivek Sharma
Cast: Jackky Bhagnani, Vaishali Desai, Rishi Kapoor, Archana Puran Singh, Irrfan Khan, Javed Jaffrey. Special appearance by Juhi Chawla, Shahrukh Khan, Sanjay Dutt, Abhishek Bachchan
Nihal Singh (Jackky Bhagnani) is a simple minded lad coming from Chandigarh. An extrovert and inventive in character, brilliant minded Nihal is inquisitive about life. He has always been close to his mother with whom he shares a strong bond.
With high hopes and ambitions, he dreams of studying in the best science institute. When he is accepted into his dream Bombay College, he is over the moon. A whole new world opens for this young man as he meets new people and new challenges.
But what no one knows is that Nihal harbours a secret – he can foresee the future. Initially, neither the students nor his lecturers take him seriously. Meesha is the rich, spoilt college brat who cannot stand Nihal’s friendly nature.
Just when life was running smoothly, Nihal begins to get visions of Meesha being in danger. By saving her life, his hidden secret is revealed by the media.
But what Nihal doesn’t know is that someone somewhere is trying to use his gift against him. An innocent and naïve Nihal is soon manipulated as his visions becomes a deadly tool.
Will Nihal’s brilliant mind recognise the traitor before he destroys everything that he loves? Kal Kissne Dekha (meaning who has foreseen the future?) reveals all.
Directed by Vivek Sharma of the Bhootnath fame, Kal Kissne Dekha is a debut film for Jackky Bhagnani and Vaishali Desai.
Whilst Jackky is the son of producer Vashu Bhagnani, Vaishali is the grand daughter of the late filmmaker, Manmohan Desai.
Taking his role seriously, Jackky worked very hard to get into shape for all the stunts he had to perform in Kal Kisne Dekha. He is not new to Bollywood – he has assisted his father during the making of Deewanapan and Rehna Hai Tere Dil Mein.
The campus scenes have been shot at the University of Witwatersrand in Johannesburg, South Africa whilst the rest of the movie has been filmed in Durban, Cape Town and Pattaya Beach near Bangkok in Thailand.