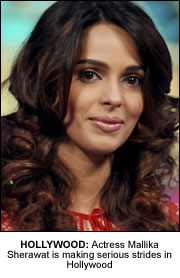 IN Hollywood you’d be forgiven for thinking Aishwarya Rai was the only actress of any note from the glamorous world of Bollywood.
Not the case given that fellow actress Mallika Sherawat looks likely to change that perception after making serious strides in the industry. The actress burst onto the Hollywood radar in ‘The Myth’, a fantasy adventure film alongside the brilliant Jackie Chan. The film gave Mallika the western exposure she yearned and fast forward to today it looks to have paid off. Currently the talk of tinseltown, the actress already has a number of Hollywood projects in the pipeline. Jennifer Lynch – daughter of the critically acclaimed director David Lynch – will direct Mallika in ‘Hissss’, while in the summer she’ll begin shooting on another big Hollywood project.
We caught up with Mallika ahead of the DVD release of ‘The Myth’ to find out how much she owes Jackie Chan for introducing her to her new audience…
Interview by Zakia Yousaf
Your first Hollywood movie – The Myth – is out on DVD this month. How excited were you when you were given the project?
At that time it was the most exciting thing to ever happen to me – it was a surreal experience – I was just three films old and to land a Jackie Chan film! I mean Jackie can get any Asian actress to act in his film in a heartbeat, and to think he chose me over everyone else in India was really flattering.
Were you eager at the time to experience Hollywood, or did the offer come out of the blue?
The offer came out of the blue, but I’ve always believed in Global Cinema.
Your famous co-star Jackie Chan is a legend – What was it like to work with him?
Jackie is the most amazing person I’ve ever met. And in spite of being one of the biggest stars in the world is so giving, and humble. And his energy is infectious.
Did he have any advice for you ahead of shooting?
Well he insisted on me doing my own stunts, and I had to train for months!
The film featured at Cannes – that must have been a very exciting experience for you.
It was very exciting, and I’ll never ever forget the experience. Never did I imagine growing up in small town India that I’ll be on the red carpet in Cannes with a legend like Jackie Chan.
How was the experience of shooting ‘The Myth’ different to the Bollywood movies you have done?
Well, the scale as far as production is concerned was much much bigger, and they were way more organized and well planned than any of my Bollywood productions.
What do you think ‘The Myth’ did for your career in making Hollywood aware of you as an actress?
Well I made it to Time magazine during Cannes, and an entire world of Jackie Chan fans who do not watch Indian films got to know me. The Myth is an invaluable part of my resume.
You’re back on the Hollywood trail with your forthcoming film ‘Hissss’ – tell us a bit about the film and your role in it.
Even though “The Myth” was a break out film for me internationally, “Hissss” is by far the most exciting role for me as an actress, and its Jennifer Lynch’s interpretation of the ancient “Naagin” legend, with SFX genius Bob Kurtzman handling the creature effects.
Aside from ‘Hissss’ what other films have you got lined up for the rest of the 2009?
There’s one other film to be directed by an exciting Hollywood director which we’ll start shooting by the end of the summer. I can’t say anything more about it until the official announcement!
The Myth is released as a two-disc DVD as well as being available on blu-ray from the 4th May
WIN A COPY OF THE MYTH ON DVD – CLICK HERE