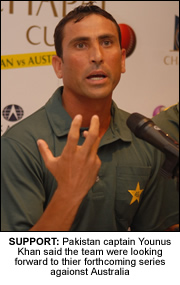 THE Pakistan cricket team arrived in Dubai earlier this week and declared themselves fit and ready to challenge Australia in the upcoming series between the two cricket-mad countries.

With the opening game just a week away, Pakistan can’t wait to face the Australian challenge head-on according to captain Younus Khan.
“We know that the Australians will be formidable opponents. They are not the No.1 ranked team in one-day cricket by accident,” Khan said.

“The fact that they have maintained their position at the top of world cricket for so long is a great achievement. However, we are approaching this series with great optimism, and we hope to play our part in some exciting and dramatic matches,” he added.

The series will be the first time Pakistan will take to the field following the terror attack on the Sri Lankan team in Lahore in March.
With future matches in Pakistan looking unlikely the team look certain to use Dubai as their ‘home’ base for future tours.
Khan said he hoped fans had travelled from Pakistan to get behind the team.
“Our supporters are the most vocal in the world. Hopefully, they will come to the games and their support could make a big difference,” Khan said. “This is our home Series and we want to generate an outstanding atmosphere in Dubai and Abu Dhabi”.

Pakistan will play a warm-up match against Pakistan A tomorrow which will be the first opportunity for the players to experience the newly built 25,000 capacity Dubai Sports City Cricket Stadium. The first match will then take place there on Wednesday, 22 April.

Getting back into shape – The Asian Way!

A murder investigation has been launched after teenager stabbed in Harborne

Have goals to achieve in England

Fyre Festival Goes Down in Flames

Livejasmin was a grown-up live videos talk webpages, exactly where anyone and clients fulfill...