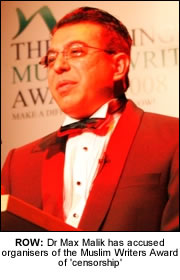 AN award-winning British Muslim novelist has accused organisers of a national Muslim writer’s award of censoring his controversial debut novel because it focussed on issues including suicide bombings and paedophilia.
Former GP-turned-novelist Dr Max Malik was led to believe his debut novel ‘The Butterfly Hunter’ was a “hot favourite” for this years Muslim Writer of the Year Award.
But despite being shortlisted, the book was never handed over to the independent panel of judges which included respected authors and publishers.
He only realised his novel had not been submitted when perplexed judges told him they had not seen his book when he asked them for feedback.
Dr Malik, who ironically scooped top prize at the very same competition last year, said he believed organisers wanted to ‘bury’ his work because of its content.
“I’m angry at the treatment I’ve received,” stated Dr. Malik “because my creative effort is being treated as if it’s somehow unclean and unworthy.
“Clearly, the Muslim Writers Awards has decided that the novel is so unpalatable for them that it needs to be buried.”
‘The Butterfly Hunter’ deals with controversial issues facing Britain’s Muslim community including suicide bombing, drug abuse, paedophilia and sexual assault.
Dr Malik denied his work was blasphemous or disrespectful towards Britain’s Muslim community.
“I’m deeply dismayed that a project like this, which is supposed to unearth new talent and celebrate artistic expression, has been hijacked by the puritan mindset. Yes it’s true that not all the Muslim characters in my book are model citizens. However, this is just a reflection of the realities we face today.” added the author.
“It’s unseemly that my novel is being treated as if it’s the second coming of The Satanic Verses. I have created a work of fiction, which is neither blasphemous nor disrespectful towards any particular group or individual.”
Imran Akram, who oversaw the 2008 competition, was replaced earlier this year as Chief Executive of Innovative Arts, the company behind the Muslim Writer of the Award.
New Project Director, Irfan Akram, told The Asian Today he did not believe a “deliberate attempt was made to censor any submissions made by the public during the 2008 initiative.”
He added: “Dr Malik was in fact profiled in our Awards magazine, and also was given stage time to talk about his book on the Awards night.

”I can assure all those concerned that Innovate Arts does not believe in censoring the work of the entrants to the Muslim Writers Awards.
“The 2009 Muslim Writers Awards will be bigger and better, and work to celebrate and nurture writing talent with Britain’s Muslim community. We believe it’s important to encourage UK Muslims to increase their level of contribution to the artistic and cultural welfare of the country.”