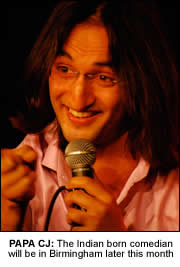 WE’RE told he’s smart, funny and the girls dig him – welcome to the eventful world of Asian comedian Papa CJ. Rumoured to be a direct descendent of the Maharaja of Merebaapkaraj (pronounced Mere-baap-ka-raj) in India, Papa CJ has risen from relative obscurity to become one of the most talented funny men on the circuit.
Not to long ago he was setting London’s corporate business world alight before deciding to wave it goodbye in 2004 and landing head first into the world of comedy.
To date he has performed all over the world, found himself in the top 10 on the hit NBC show Last Comic Standing, and has even set up his own charity One Child. Later this month he’ll perform in Birmingham at the Real Deal Comedy Jam mini tour. Zakia Yousaf caught up with Papa to give you a taste of what we’re in for…
Papa CJ – what a name! That can’t be your real name surely?
As a teenager I witnessed a brutal assassination by an international mafia cartel and have since been under a witness protection programme by the International Court of Justice. Therefore as far as you’re concerned, just call me Papa.
You’re in Birmingham later this month for the Real Deal Comedy Jam Mini tour – are you looking forward to it?
No. I hate all the other performers. I hate Birmingham. I hate RDCJ. And what the hell is a ‘mini’ tour? That’s like a pornstar with a semi.
The official press release for the tour reads: “Papa CJ – He’s smart, funny and the girls dig him” – is that true?
No. But I did sleep with the PR girl so that might explain it.
What motivated you to pursue stand up comedy?
I saw stand-up for the first time at the Fringe Festival in August 2004. I figured then that if you could make a living by standing on a stage and talking b******s then I didn’t want to be in an office any more. Three months later I did my first gig and in November 2004 I won the King Gong Show at the Comedy Store in London.
Do you ever regret leaving behind the daily grind of a 9-5 job?
Well I do sometimes wish I had considered prostitution before stand-up comedy. You get paid better for a shorter performance and you don’t get screwed or abused as much.
Much of your routine is based on your own experiences of living in the UK – do you at times feel apprehensive about taking the mick out of the UK when you perform to audiences here?
Not at all. I have balls the size of an elephant (although that is more of a medical problem than a metaphor for courage). I just get up there and be myself i.e. a cocky little f****r who gets away with things because he says them with intelligence and a smile. My schoolteacher had once written to my girlfriend’s parents telling them that I was a ‘wolf in sheepskin’. But that was before she got pregnant (the schoolteacher not the girlfriend silly!).
Having performed around the world, do you find yourself having to adapt your routine to suit different audiences?
No. Once the audience have come in they have already paid so I peddle the same crap everywhere and just get decent PR to clean up the mess afterwards. I’m lazy…so f*** em (the PR people…coz apparently that’s how you get them to write ‘smart, funny and the girls dig him’).
You’ve done gigs in India – tell us a bit about your audiences in India. Is it easy to get a laugh out of them?
It is easy to get laughs out of Indian audiences because I surround them with my helpers who are armed with King Cobra snakes. Before the show starts the doors are locked and the audience is warned that if the laughter level is not high enough then the snakes will be released. I storm every night although recently I’m beginning to suspect that it might be nervous laughter.
There is a serious side to you – tell us how your charity ‘One Child’ came about
Well in my early days of comedy I didn’t make much money so I needed some kind of con job to get food on the table. I figured people in the UK are suckers for charity so why not use that as a front to fund my vices. I must admit though that I feel slightly embarrassed being referred to as ‘One Child’! On a separate and more serious note, our annual fund raising comedy night is on 11 May 2009 at the Comedy Store in London. Please tell your friends to come.
Details are on www.papacj.com/charity
Finally, love the hair! Ever thought of auditioning for a L’Oreal advert?
No but I did consider being a professional pole dancer. In fact I even convinced a journalist recently that I was one. Google ‘Papa CJ Tribune’ and you’ll find the article that came in the front page of the Chandigarh Tribune recently. (It’s true!)
You can catch Papa CJ and a host of other comedians at the Real Deal Comedy Jam Tour at the Colston Hall Theatre, Bristol – Fri 24th April and the Alexandra Theatre, Birmingham – Sun 26th April