Malkit Singh to perform at O2 Your Country Live 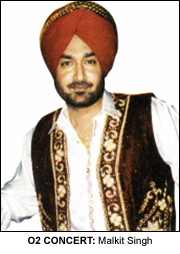 BHANGRA legend Malkit Singh will play at the O2 arena later this month as part of a celebration of multi-cultural Britain.
Malkit, who was awarded an MBE last May for his services to music, will take to the O2 Your Country Live stage with a full band for an exclusive performance for a lucky selection of die-hard fans.
The concert will form part of a three-day extravaganza of specially curated O2 gigs which will celebrate the best UK band talent from every corner of the globe.
Malkit is one of the biggest selling Bhangra artists in the world having worked with the world’s top musical legends, including Oscar winner A R Rahman and the legendary Bollywood Sitar player Pandit Ravi Shankar.
The concert, on 27 March, will also feature drum maestro’s The Dhol Foundation.
Want tickets? Text SINGH to 67777 for a chance for you and a friend to see Malkit Singh live at the IndigO2 on March 27h