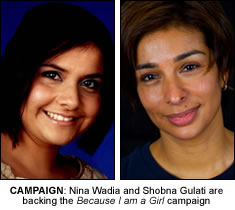 TWO of Britain’s best-loved Asian actresses will lead a charity’s call for action, on behalf of girls who suffer violence and discrimination because of their gender.
Eastenders TV star Nina Wadia and ‘Dinner Ladies’ actress and ex Corrie favourite Shobna Gulati are among a number of high profile names backing the Because I am a Girl campaign. The campaign, launched by children’s charity Plan UK, is urging Gordon Brown and other political leaders to step up the fight against gender inequality and its impact on girls in the world’s developing regions.
A virtual showcase of the stars’ childhood photos and quotes about the women who inspired them when they were girls will be showcased on the becauseiamagirl.org web site on Sunday 8 March to mark International Women’s Day.
Actress Nina Wadia said: “Think of all the dreams and ambitions your mother, grandmother, sister, aunt and daughter ever had. Now take them all away. This is how the girls that in this campaign feel every day of their lives. Remember, every girl needs respect. Every girl has the right to an education. Every girl simply needs to know she is wanted, loved and that she belongs. It should not come down to luck. And I know this, because I am a girl.”
Shobna Gulati added: “It should no longer be acceptable to consider women and girls as second class citizens”.
The drive was launched in response to the shocking findings of a Plan study on the state of the world’s girls.
Sex selective abortion has left over 100 million girls ‘missing’ from the population of the developing world, according to figures highlighted in the charity’s report.
Furthermore girls aged between 12 and 17 are believed to make up to 90 per cent of the world’s child domestic workers. Many are at risk of sexual exploitation, violence and abuse.
Marie Staunton, chief executive of Plan UK said:“To have these inspirational women champion our campaign is a wonderful opportunity for our charity. Today girls and women make up the majority of the world’s illiterates and the majority of its poorest people.
“It is vital we step up the fight against these injustices and the discrimination endured by many girls in the world’s most deprived regions.”
For more information about Because I am a Girl visit www.becauseiamagirl.org