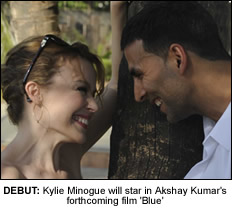 KYLIE Minogue has jetted into Mumbai to begin work on her Bollywood debut.
The Aussie singer is all set to make her first foray into Bollywood in Akshay Kumar’s forthcoming film ‘Blue’ – said to be the most expensive Bollywood movie ever.
No expense was spared to make sure the award-winning singer came on board for the film as she jetted into Mumbai for an eight-day shooting schedule.
Kylie will film the music video for the film’s title track with Akshay, as well as scenes for her role in the film.
She has also recorded two songs including the title track, which has been composed by multi-Oscar winner A.R. Rahman.
Before getting on with business, Akshay, ever the good host, invited the singer for lunch with the family.
Wife Twinkle Khanna joined in on the fun while Akshay prepared the special meal.
Let’s hope his cooking didn’t leave Kylie feeling Blue!