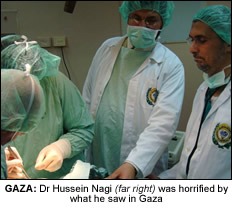 A CONSULTANT in Birmingham swapped the West Midlands for the Middle East when he travelled to Gaza to offer urgent medical assistance to medics treating those injured in the recent crisis.
Dr Hussein Nagi, an anaesthetist at City Hospital, joined a team of 10 doctors and a nurse to work with aid organisations Human Appeal International and Palestinian International Medical Aid.
They took equipment and shared their expertise by providing training and worked in operating theatres that would be considered unsafe in this country.
“The standard is much lower than here. In Britain it would be illegal to work without an anaesthetic technician in each theatre. Over there I found one anaesthetic technician per six theatres,” explained Dr Nagi.
“There were two teams in theatre, which is unheard of over here, so I realised there was a need for an extra pair of hands.
“They are desperate for anaesthetists: in one day they had about 240 casualties in one hospital and the doctors were working flat out for 48 hours, even on the fifth day of the crisis. There were injured patients who had still not yet gone into theatre because of the workload,” he added.
Now back in Birmingham Dr Nagi said he is keen to establish a pain management clinic in Gaza following his experience.