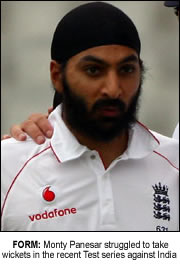 ENGLAND spin-bowling coach Mushtaq Ahmed believes Monty Panesar remains a match-winner at international level and is confident of revitalising the left-armer.
The 26-year-old suffered a dip in form in recent months, particularly during the tour of India before Christmas when he was out-performed by off-spinner Graeme Swann.
He took only six wickets in the two Tests despite the helpful conditions and failed to make a single breakthrough in India’s successful fourth-innings chase of 387 in Chennai.
But Mushtaq, who has been recruited for the 10-day build-up to the four-Test series against West Indies as part of his deal with the ECB, said: “He is a match-winner.
“People like Inzamam-ul-Haq and Mohammad Yousuf hardly praise spinners because they’re too good against them.
“But after they played against England in England, they told me he was the most difficult bowler to face – the Indians said that same thing.
“Spinners sometimes can have bad days, so as a spinner if you play six games and win two games, that is a good ratio, I believe.
“Monty has that potential to win games single-handedly.”
The last time he did so was against New Zealand at Old Trafford last May and boosting belief will be part of Mushtaq’s remit.
He said: “I believe these 10 days before the Test series are important because before big games as a spinner you need the motivation and goals – what kind of achievements you are targeting in that series?
“Dips happened in my career also. Sometimes you go in that shell where you think, ‘Hang on, why am I not getting wickets’?
“That is when you need that good surrounding, and I believe I can play that positive role with him.”
England began preparations with their first net session this morning and face St Kitts & Nevis in a three-day match from Sunday to Tuesday.

Shoaib a no go

After above 25 years as a splitting up healing specialist, I’ve seen a trend.