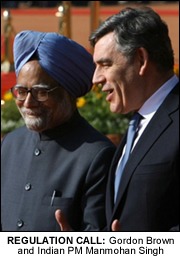 BRITISH Prime Minister Gordon Brown, in Delhi for the India-UK summit, today faces pressure to regulate his country’s retailers after new revelations that Indian workers receive poverty wages making clothes for British stores.
The pressure, from the anti-poverty charity War on Want, comes as Mr Brown promotes UK business at the summit with Indian premier Manmohan Singh. Mr Brown is accompanied by a British commercial delegation expected to sign £3 billion of deals.
Low production costs in India have brought cheap fashion to UK consumers and kept British inflation at low levels for years.
But War on Want says garment workers in India and other developing countries are paying the price for UK prosperity in poor pay and working conditions, as a result of British government failure to regulate the sector.
New evidence from the Garment and Textile Workers’ Union in India reveals that employees with a leading Bangalore manufacturer producing clothes for Matalan, H & M and MK One are being denied a living wage, £54 a month – enough to meet their bills for housing, food and healthcare.
They receive only £38 a month – less than three-quarters of a living wage.
War on Want has withheld the manufacturer’s name to protect workers’ job security.
Simon McRae, senior campaigns officer at War on Want, said: “While Gordon Brown bangs the drum for UK business, Indians face sweatshop pay making clothes for British stores. This latest scandal involving exploited workers underlines the need for the UK government to introduce regulation to stop this abuse.”