Trio sentenced to total of 22 years 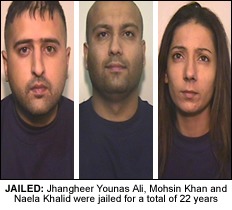 TWO men and a woman have been sentenced to a total of 22 years today for smuggling heroin into the UK which was carefully woven into rugs from Afghanistan.
Jhangheer Younas Ali and Mohsin Khan, both 29, and Naela Khalid, 28, were jailed at Minshull Street Crown Court.
They were caught after custom officials at East Midlands Airport discovered three Afghanistan rugs containing heroin with a street value of £500,000 within the weave of each one in April 2007.
The heroin was contained in thin plastic tubes, which had individually been sewn into the weave of the carpet across the width of each rug.
Ali and Khan both pleaded guilty to conspiracy to import class A drugs on Monday 21 January 2008. Ali was sentenced to 11 years, while Khan, who also pleaded guilty to dangerous driving, was jailed for 12 years.
Khalid was found guilty of conspiracy to import class A drugs following a 5 day trial and was sentenced to six and half years imprisonment.

The trio were caught after custom officials from East Midlands Airport intercepted a package of three rugs from Afghanistan.
On closer inspection officials found sizeable amounts of heroin carefully concealed within each rug.
Four days after the find, Greater Manchester Police attempted to deliver the package without the drugs to its intended destination.
The occupier of the house refused to accept the parcel though, stating they were not the person named on the package and they were not expecting a parcel.

Attempts were then made to contact the phone number on the package but the call was not answered. A short time later a man called the courier stating he was the owner of the phone and he asked for the package to be redelivered to the address.

On Tuesday 24 April 2007, the parcel was once again delivered to an address on Montcliffe Crescent, but the courier was intercepted outside the house by Khalid who directed him to a different address on the same road.

Khalid then took the parcel back to her house in Burnage.

On Wednesday 25 April 2007, Khan and Ali were seen to go into Khalid’s house with her, and they attempted to open the package. 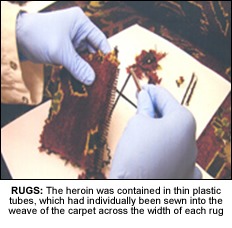 Officers followed the Honda and after a 20 minute high speed pursuit Khan and Ali were arrested after trying to flee the car. Khalid was also arrested after being stopped in the Rover.

All the offenders’ addresses were searched by officers. The search of Khalid’s address revealed that attempts had been made to open the parcel and documents linking Khalid to the original address the parcel was sent to were also recovered.

A number of cars and mobile phones were recovered and forensic examination revealed that the phones had been used to contact the courier to arrange delivery of the parcel.

Detective Inspector John Ogdon from GMPs drugs unit said: “I am satisfied that we have disrupted a huge drugs operation in Oldham and prevented dangerous drugs from reaching the streets.”