Zeenat Moosa looks back at the achievements of a groundbreaking organisation 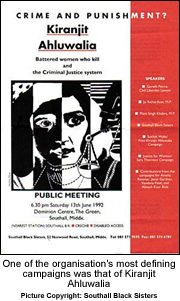 ONE of Britain’s flagship feminist organisations celebrated its 30th birthday this year.
Southall Black Sisters was founded in 1979 during the Southall race riots. The non for profit organisation was set up to meet the needs of Black and Asian women who are the victims of domestic violence or injustices in the legal system.The main aim of the organisation is to empower women in gaining more control over their lives, to be able to live without fear of violence and be able to assert their human rights to justice, equality and freedom.
Over a thousand women a year contact Southall Black Sisters on issues such as domestic violence, homelessness, immigration, police and racial harassment, health and concerns about their children. Besides advice and support work, Southall Black Sisters has been at the forefront of challenging domestic and gender violence locally in London. Nationally, the organisation works with groups like the Women’s Institute, Townswomen Guild and Justice for Women (to help change the once male protected law on provocation). They also work closely with immigration, education and anti racism groups to help successfully continue to campaign and lobby the government to modify laws concerning women.
Amongst their many accomplishments, Southall Black Sisters were successful in campaigning against the One-Year Rule (which required spouses to live together for at least one year before the immigrant spouse was allowed to apply for residency in Britain), supported the strike of Asian women at the Burnsall Factory in Birmingham, and has spoken out about forced marriage, honour killings and domestic violence, when others were reluctant to do so (the murders of Balwant Kaur and Gurdip Kaur in the 1980s prompted the organisation to produce ‘A Fearful Silence‘ a film focussing on domestic violence in Asian Communities) Furthermore, having confounded Women Against Fundamentalism, Southall Black Sisters highlighted their repeated defence of secularism against all forms of religious fundamentalism.
In 1986 the organisation received funding from the Greater London Council and was able to establish Southall Women’s Centre. Four years on, in 1987, a new centre was established and in 2000 the Southall Black Sisters trust was set up. In its 30 years, the organisation has managed to achieve some amazing triumphs. In 1995, a delegation of Southall Black Sisters women attended the World Conference in Beijing and also presented at the UN Conference on Racism, Racial Discrimination, Xenophobia and Related Intolerance in New York in 2001. 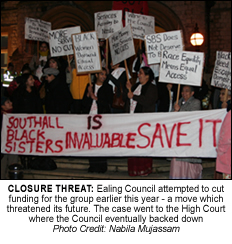 One of the most high profile cases dealt with by Southall Black Sisters was that of Kiranjit Ahluwalia, who in May 1989 set fire to her husband, Deepak after enduring 10 years of brutality. This was the first case where the Southall Black Sisters supported a battered woman who had killed her husband. Through public meetings, pickets, demonstrations, The Free Kiranjit Ahluwalia campaign in 1991 and extensive media coverage, Southall Black Sisters were able to have Mrs Ahluwalia released upon appeal after having served 3 years of her 12 year sentence. The case drew wide media interest and in 2006, the book a Circle of Life which cited Kiranjit Ahluwalia’s story was made into a film, Provoked, starring Miss World, Aishwariya Rai.
Amongst their glittering resume, Southall Black Sisters have won many awards including the Martin Ennal’s Civil Liberties Award in 1992, the Advice 2000 Challenge Award in recognition of the campaign against the 1 year immigration rule and were also nominated by the Government’s Women and Equality Unit for the Asian Women of Achievement Award in 2003. Although they have been threatened by a suspension of funds and faced ultimate closure on numerous occasions (the latest being just last year) Southall Black Sisters defiant spirit shows it’s an historically important, radical and essential group within Modern British Society.