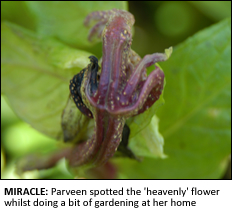 IT’S not often a spot of gardening can leave you speechless, but for Parveen Akhtar the sight of the word Allah written in Arabic on the flower of a mint leaf did just that.
The stunned 34-year-old housewife from the Tyseley area of Birmingham couldn’t quite believe her eyes…and luck. Four years earlier Parveen witnessed her first miracle when she sliced open an aubergine and found Allah’s name written intricately inside.
Today that aubergine still bears the heavenly name and takes pride and place in her home.
And with visitors still flocking to her home to see the aubergine, now Parveen has another miracle to show them.
Describing the moment she sat down for a bit of gardening Parveen said: “I was weeding the garden when something caught my eye. I had a closer look at the flower and I couldn’t believe what I was seeing. I called my husband and asked him to look at the flower and he was as shocked as I was.” 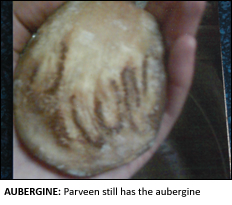 Parveen believes this latest wonder is more of a miracle than luck.
“I’m so amazed because I never thought this would happen to me twice,” she says.
“For something like this to happen once is lucky, but for it to happen twice is a miracle.”
And neighbour Naseem Khan is in no doubt there may be something special about her friend.
“It’s amazing, just beautiful,” Naseem said. “You can’t deny it. As soon as you look at it you know it says ‘Allah’. “When Parveen told me I came round with my husband and daughter and as soon as we saw it there was no doubt in our minds as to what we were seeing.
Naseem added: “I told Parveen to ask an Imam what the message is behind this miracle because mashallah it’s happened to her twice now. First the aubergine and now the flower. It’s amazing.”
Parveen now plans to show pictures of the flower to her local Mosque.
Have you come across the word ‘Allah’ somewhere unusual?
We want to hear from you. Call The Asian Today Newsdesk on 0121 314 2892.